What is their recent behaviour teaching students? 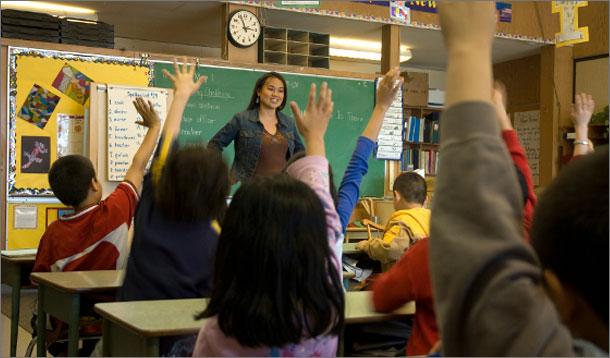 I've been away for a few weeks but came back to the same frustrating local news. How disappointing to learn that the teachers union vs the government fiasco is still going on in Ontario. Honestly, I don't know enough about the issues to comment on the conflict. I feel for both sides who each believe that they are so right. However, let me be clear. That is where my sympathy for the teachers begins and ends.

In the '50s I studied to be a teacher. At 18, I faced my first grade three class and can still remember those sweet little faces all looking to me for guidance. Miss Hannon was their role model, they listened to my stories and took everything I said as absolute gospel. Even at that young age I understood how important I was in their lives and tried in every way to teach right from wrong.

I was appalled a while back when one of my very young granddaughters said to me something like, 'You know, Grandma, my teacher told me that Dalton McGuinty is not a good premier. He doesn't care about teachers.'  Hmmm... I thought teachers were supposed to teach things like math, social studies, and art. Since when do politics belong in a classroom of 10 year olds? I'd call it spiteful, childish behaviour on the part of that teacher.

Yesterday, another granddaughter told me that her teacher told the class that they could stay up late and not do their homework because the teachers would be on strike the next day. And then, after all the parents scrambled to make alternate plans for their kids, the union changed their mind and opened the schools. Fun and baby, childish games! I'll bet they were so proud of themselves. Actually, I think they should be mortified at what their behaviour is teaching their pupils.

I wish there was something creative that we as parents and grandparents could do about this. Is it just my wishful thinking?

When my daughter Erica Ehm attended high school in Hudson, Quebec the teachers went on strike and refused to be present at extracurricular activities. Erica was heartbroken because at 16 she was directing a student production of Grease and they couldn't rehearse without an adult present. I made a choice. Support the strike or support my daughter. I believe I did the mature thing and supported Erica and all the kids that were so invested in this project. I volunteered (no insurance issues then) to be at all rehearsals and the show opened to a standing ovation.

That year, Erica also wrote a column in the local newspaper. She bravely devoted one issue to why teachers should not go on strike. Instead of the teachers using her actions to talk about 'democracy' they banded together in a letter to the editor to lambaste her for her actions. Another perfect example of absolute childish behaviour.

That night at the dinner table we had a family discussion about freedom of speech. Erica was incensed and was ready to write her rebuttal. Her dad and I told her that we would support her if she did but sadly we also had to explain that these 'so-called' teachers were older, smarter and had more power. They had no interest in her the student. They were only interested in winning their fight and would 'squish' her in the battle.

It was a sad lesson for her. Erica backed off but not out of respect. She walked away because her teachers had let her down. She would never, ever see them in the same light again.

Nothing changes, does it?