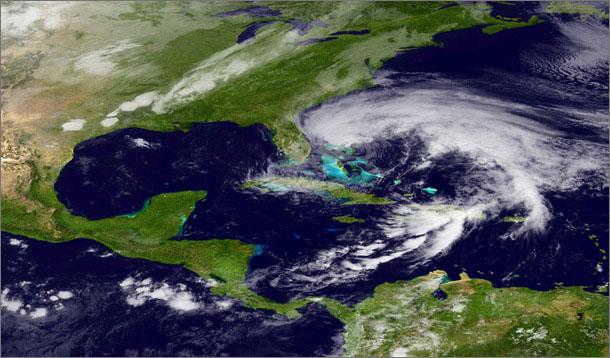 Are you bracing yourself for Hurricane Sandy's arrival? Have you seen signs of her yet?

According to an article on CBC, Canadians should be prepared for "at least 72 hours without power" and in some areas, more than 50 millimetres of rain and winds of over 100 km/h.

The storm is steadily crawling up the U.S. Eastern Seaboard, and has already wrecked havoc on much of the US's east coast, causing devastation and hundreds of flight cancellations.

"Southern Ontario, southern Quebec and southwestern Maritimes will experience high wind gusts and periods of heavy rain beginning [late Monday] and continuing into Tuesday," warned Environment Canada in a bulletin. The mouth of the St. Lawrence and the Gaspé peninsula in Quebec is also expected to be hit by the storm.

The heavy rainfall of between 20 and 50 millimetres from Ontario through the Maritimes is expected to cause flooding. And winds of 90 km/h winds or higher, "especially along western Lake Ontario, the Niagara escarpment, Lake Huron and Georgian Bay," will likely lead to broken and uprooted trees, according to The Canadian Hurricane Centre.

"If you're in the Niagara Region [or] if you're south of [Lake] Huron towards Sarnia, northerly winds will be piling that water up on shore," said CBC meteorologist Jay Scotland. "Avoid being near the shore. The waves are fun to look at, but you'll be doing a dangerous thing to take in those sights."

Waves are expected to reach "five [to] six metres" in some coastal Maritime areas.

In a recent statement The Canadian Red Cross (CRC) advised citizens to stockpile supplies, "including water, food, flashlights and a first aid kit."

"Be prepared to take care of yourself and your family for at least 72 hours in an emergency,” said Mike Morton, Director of Disaster Management for the CRC. "By taking some time now to store emergency food, water and other supplies, you can provide for your entire family during a power outage or evacuation."

Also a good idea to tether any outdoor items—such as garbage cans, lawn furniture, and Halloween decorations—that may be blown away, causing further damage.

Anyone due to travel should check the status of flights; as many as 300 have already been cancelled or grounded.

"Our primary goal at this point is to make sure that everybody understands that this is going to be a serious storm," said Allison Stuart, the chief of Emergency Management Ontario.

Do you think the warnings have been blown out of proportion? What preparations, if any, have you taken in the wake of Sandy?

If you were intent on beating flu season this year by vaccinating, better sit tight for a while. Distribution of Novartis's vaccine was halted here after "tiny clumps of virus particles" were found in some batches of the shot at an Italian plant.

According to an article in the Ottawa Citizen, Health Canada followed suit after other European countries recently suspended distribution of the vaccine.

Sold in Canada as Fluad and Agriflu, Novartis is investigating production of its vaccines.

Although more than one million doses of the vaccine have already been administered in Europe with no adverse effects reported, several countries—including Italy, Germany and Switzerland—have suspended further use until the "clumping issue" is resolved.

Novartis claims the clumps in vaccines are not an unusual process in production, and insists their vaccines are safe.

"The aggregate proteins are predominantly influenza virus-derived (mainly hemagglutinin), all normal and necessary components of influenza vaccines," said a Novartis spokesperson. "Aggregation of these proteins is not unusual in vaccines manufacturing."

Around 70 per cent of Novartis's vaccine supply has already reached Canada, but the pharmaceutical company only supplies around 20 per cent of total Canada's annual flu vaccine purchase. (GlaxoSmithKline produces the majority of the country's seasonal flu vaccines.)

Officials are concerned that the delay means some provinces and territories may face a vaccine shortfall due to the ordering process. In the meantime, do what you can to prevent the flu in the first place.

Do you get an annual shot? Do you find it effective at preventing influenza? 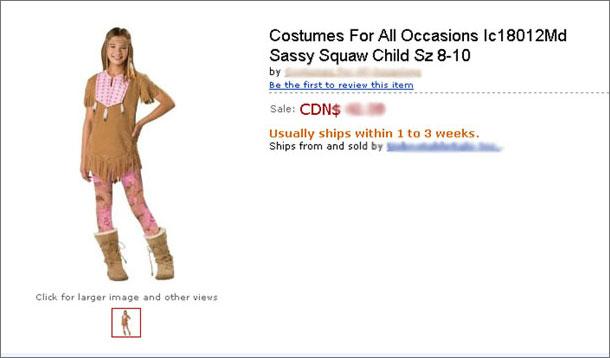 In our continuing tirade against uncouth Halloween costumes comes the "Sassy Squaw," which was pulled by a US company after CBC North complained about the name.

According to an article on the CBC, the girls costume—sold on Amazon.ca and Sears.com—includes a "hide dress, feather hairband, beaded necklace and pink leggings with what look like ancient cave drawings."

This and other aboriginal-inspired costumes, including "Cheeky Cherokee," "Indian Brave," and "Spirit Warrior," were designed and manufactured by the San Diego company, Incharacter.

Though the designers clearly thought they were paying fun homage to Native American culture, aboriginal women are less than impressed by the stereotype.

“[The costume] gives a primitive view of what aboriginal girls and women are all about,” said Yellowknife resident, Gail Cyr.

“It should be pulled immediately,” insisted Kathy Paul Drover. “Our people would never dress like that.”

An Incharacter spokesperson claimed it had "no idea the term 'squaw' was offensive," and pulled the costume from its website and production line. To their credit, the company has also reportedly contacted retailers requesting that the costume immediately be removed from shelves.

If this costume was an "honest mistake," as Incharacter claims, then it was also one perpetuated by several major retailers which should have known better.

What's the most offensive costume you've seen? Should political correctness cease to apply for one night a year, or is Halloween just an excuse to pass off bad taste and racial slurs as cheeky fun?