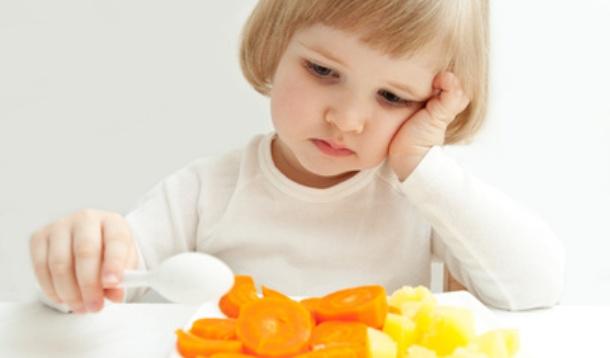 Many parents dread mealtimes with their kids, because getting them to eat - or at least even try - nutritious foods seems nearly impossible without a full-on battle. Growth slows after the age of two, which often translates into kids having smaller appetites and erratic eating patterns. When this is coupled with a child's newfound desire to control their lives (eg. being a  lot more selective with food choices), this creates the perfect storm for mealtime battles. Instead of doing what might feel instinctual and hovering over your child making sure that he ingests something that is green, take the pressure off and get him talking.

Make meals more enjoyable and less stressful by asking your child these 6 questions:

How does your tummy feel?

If your child declares that she is "done," instead of asking her to have "three more bites," nurture her natural ability to eat intuitively by asking how her tummy feels. "How does your tummy feel? Just a little full, half way full, or all the way full?" is something that I often ask my preschooler. Getting your child to think about her internal hunger and fullness cues at an early age, and encouraging her to honour those cues (instead of external ones) will increase the chances of her continuing to trust her body and eat intuitively later on. If my son declares that his "tummy is full" I remind him of when his next eating opportunity is, and respect the fact that he is full. Appetites of children over the age of two are so unpredictable and fluctuate depending on their activity level, what they ate the previous day, or whether they're going through a growth spurt or not. My four year-old son may out-eat my husband one week and hardly eat much at all the following week. My advice to parents of young kids when it comes to erratic appetites, is to roll with it and to not worry -9 times out of 10, these fluctuations are completely normal. When the pressure is off, most young kids eat when they're hungry and stop when they're full.

This Is How You Eat According To Your TRUE Hunger Cues

How can I make this food easier for you to eat?

When you notice that your child isn't interested in what was served, is playing with his food, or declares that he is done, a great question to ask is "is there a way that I can make this food yummier for you?" When I started asking my preschooler this question, it literally transformed our mealtimes for the better. And the answers were very interesting! One night, he asked for ketchup to dip his steamed broccoli into (after which, he gobbled it up), and another night when he said that he didn't like his chili, I asked him if grated cheese would help, which ended up being a game-changer. Your child might need some ideas from you such as "Do you need dip for your veggies?" or "Would you like me to separate your meat from your rice?", but nine times out of ten, you and your child might be able to come up with a fun way to make his meal more palatable.

The kitchen will be closed until __ o'clock; are you sure you're done?

Giving your kids the heads up that their next eating opportunity is a while away (use an easy reference such as "after school" or "before you brush your teeth" or "at breakfast time tomorrow") allows them the opportunity to re-evaluate whether or not they want to be done. It's part of the parent's job to determine when meals and snacks are offered, so that feeding doesn't turn into a free-for-all and so that kids learn self-regulation when it comes to their hunger and fullness. If no warning or reference is given, kids often hold out for their favourite snack, or complain of being hungry an hour after mealtime.

Would you like to have your dessert WITH your meal tonight?

By randomly offering treat foods alongside dinner, you not only put all foods on a level playing field, but you also take the desirability of treats down a few notches and eliminate the urgency to finish the meal quickly so that they can have dessert. Kids tend to either rush through their meal or "save up" for their dessert, eating less of their meal than they usually would. Once a week or so, we will do this at home in an effort to remind our preschool-aged son and teach our daughter, who is 18 months old, that a treat food or two can fit into their day and doesn't have to be the "prize" at the end of a meal. Because of this, treats add some fun to their day or their meal, but generally speaking, aren't intensely sought after.

Serving meals "family style" (similar to a buffet), still allows parents to be in control of what foods are offered, but allows kids (from about three years old and up) to feel a sense of control over their meal, something they inherently desire. By relinquishing a bit of control and giving young kids the opportunity to plate their own food once in a while (they may need a bit of help depending on age and ability), they are able to choose foods that are appealing to them, in amounts that feel appropriate and are able to organize their food in a palatable way (some kids like their food to be mixed up, some don't like different foods touching each other.) If kids tend to stick to "safe" or familiar foods and steer clear of new or previously rejected foods, having a separate "tester plate" may come in handy. The tester plate can serve as a pressure-free way to taste-test small bites of foods that may seem weird or "yucky," with a napkin nearby in case they need to spit it out (which should be ok). It often serves as a great tool to bridge the gap between food rejection and food acceptance.

It sounds like you're ready to "eat around the circle." Are you?

If your child belongs to the "eat one thing only on my plate club", this question may become one of your favourites. My son seems to gravitate more towards high carbohydrate starchy foods at mealtimes these days (which is typical for his age). He will often finish his bread, pasta, or rice, leaving other more nutrient-dense foods hardly touched, and ask for more of the starch. When this happens, I remind him to "eat around the circle" and then see how his tummy feels before asking for more of any particular food. This means that he must taste test the foods around his plate (always with the option of spitting it out politely) before asking for more of one particular food. The point is to encourage him to try new or unfamiliar foods, and to remind him that we eat a variety of foods with different colours, tastes and textures everyday, not just one or two foods.
With a bit of patience and consistency, changing the dialog at dinner can transform mealtimes for the better, and greatly improve your child's relationship with food.
Wondering what NOT to say to your kids at mealtimes? Here are 5 things you should never say to your kids about food,  and why you should not use food as a parenting tool. And here are 10 processed foods that this nutrition expert feeds her kids.
Feel free to check out my Facebook page, where I post free daily nutrition and feeding tips, articles and resources for parents
Category:
Food - Nutrition
Tags:
Picky eating
dealing with your picky eater
getting your kids to try new foods
how to make mealtimes more enjoyable
intuitive eating
improving your child's relationship with food