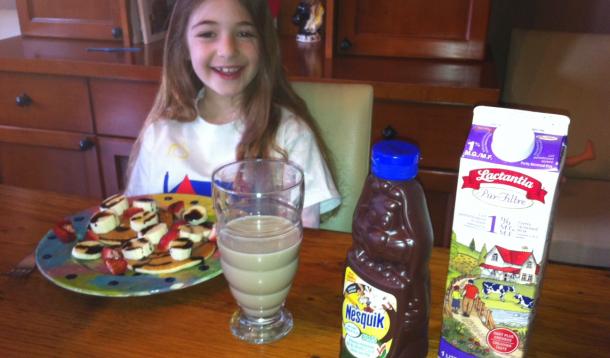 I dedicate this post to all of you who choose your battles wisely when it comes to your kids eating well.

I'm not a morning person. I like to sleep in, start slow, drink my coffee and ease into the day. A parental reality check makes this scenario impossible. Instead, it's a race to get the kids up, dressed, fed, organized and out the door on time. What makes matters worse, no matter how grumpy I am in the morning, I am extremely aware of how important a healthy breakfast is for my family.

Although there are some variations, there is a breakfast pattern we follow most mornings. Hubby makes french toast for my son, which is served with a ton of fruit and a glass of milk. My son was wired to eat healthy, so he easily gets his grains, protein and fruit every morning.

My daughter is more challenging. She's all about sweet. It became a bit of a breakfast battle until I figured out a sneaky win/win solution.

Every morning I make pancakes. Sometimes I buy frozen buttermilk pancakes, other days when I'm organized I make the batter for these apple buttermilk pancakes the night before. And here's my secret weapon. I add a bunch of fruit—bananas, blueberries, raspberries or strawberries—and drizzle them with Nesquik chocolate syrup. She wolfs these down every morning without fail. Sure I'm feeding my little one a bit of chocolate syrup, but filling her up with a bunch of healthy foods at the same time.

As for getting her to drink her milk in the morning? Forget about it. Unless it's flavoured, she's not drinking. This is a common problem many exhausted parents have to deal with. According to the Canadian Community Health Survey, as kids get older, their milk consumption decreases: 37 per cent of children aged 4 to 9 aren't getting drinking enough milk. And the stats on older kids are even worse.

So here's where picking your battles come in. No one wants to jack up her kids on sugar in the morning. I used to buy chocolate milk so my daughter would drink her protein. But I've read some reports indicating there is too much sugar in pre-made chocolate milk. Instead, I make my own by adding a bit of Nesquik (I buy the bottle that says 25% less sugar). My special sneaky step: get it looking like a milk shake with a frother. I do my best to find that happy balance of a big glass of cold milk with just a few squeezes of Nesquik to appease the picky one. She loves when I make her milk pink (strawberry flavour).

Actually, it's not just breakfast I sneak extra milk and fruit into my little monsters. At snack time, we love making milkshakes, throwing in a medley of milk, fruits, ice, greek yoghurt and a few squeezes of our trusty Nesquik chocolate syrup into our blender. (For my daughter, it wouldn't be a milkshake without chocolate).

And finally, my evil trick for a healthy dessert? I'm all about letting my kids pig out on junk food after a good dinner. They're usually too full to eat all that much of the sweet stuff. But what kid (or husband) can resist a scoop of ice cream topped off with a full cut up banana or any other yummy fruit? Dab on some whipped cream and drizzle with Nesquik. I call it the Incredible Disappearing Dessert.

For me, that's a win/win situation.

Join The Nesquik More Milk Movement on the Nesquik Canada Facebook page. You'll receive a one-dollar coupon for Nesquik to kick start your pledge to make sure your kids are getting enough milk.

And then enter our contest to win a $200 Breakfast Smoothie Prize Pack courtesy of Nesquik.

This is proudly sponsored by our friends at Nesquik.
https://www.facebook.com/NesquikCanada

Violence in The Hunger Games

When does onscreen violence become TOO much?

Violence in The Hunger Games

How appropriate is the Hunger Games movie for kids? Is there too much onscreen violence for tweens? Parents want to know!

Having a tween with a voracious appetite for reading is useful when the Hunger Game books he's devouring happen to be the hottest topic in pop culture. My son read all three books in the Hunger Games series, and then read them all again to relive the story from beginning to end. He's been counting the days till it hits the big screen, and has begged us to see the film this opening weekend.

So, when the Globe and Mail emailed me for a quote about the violence in the Hunger Games and movie, not only did I give them my thoughts, but my son was able to provide the reporter with an articulate quote (yes I'm proud). You can read the whole article on here, but I want to highlight what my son said before seeing the movie here. And I quote, “In The Hunger Games they show violence as a negative thing, and if people see that, then maybe they’ll see that violence is not a good thing.”

The kid knows what he's talking about!

The big questions and concerns amongst the parenting pop culture patrol are valid. How appropriate is this film for our innocent children's eyes? How much gratuitous violence should we subject our pre-teens too? Will this film give kids nightmares?

Last night my husband and I took our very excited 11-year-old son to see The Hunger Games come to life in the cinema. Without giving away any of the storyline, I can tell you the movie stays very true to the book. It recounts the experience of teenager Katniss who is forced to participate in a fight to the death against twenty three other young opponents. It's through her kind and intelligent eyes we witness the violence. Rather than glorifying explosions and weapons, the violence is portrayed as senseless and evil. Those in power who perpetuate it are filled with hatred and empty. Everyone else is doing their best to survive under horrifying circumstances.

The violence you actually see on the screen is minimal. Most of the murders are shot with shaky cameras, creating a blurry sense of chaos and struggle, but minimizing anything graphic. There are no guns, unlike the trailer for GI Joe which ran before the film, which showed Bruce Willis laughing while shooting his machine gun senselessly. In The Hunger Games, all of the fighting is hand-to-hand combat with swords, knives, and bows and arrows—where you feel the characters' desperate need to survive the nightmare their government has thrown them into. There is nothing glamorous about their situation.

Pretty much any tween video game has signficantly more violence in them, all of it gratuitous with no morality.

Rather than being a movie about violence, The Hunger Games is a film of self-empowerment, of fighting against oppression, and teamwork. The fact that the main protagonist is a strong, tactical and compassionate young women strikes a postive chord in my feminist self, celebrating the many moments she overpowers her opponents with fast thinking and a great shot.

So, did I like the film? No. Did I love it? Yes. It's the right kind of "edgy" film to take your tweens to and have some awesome conversations about it after about leadership, strengh of character and yes, even violence. Can't wait for Catching Fire, slated for release November 2013!

Did you see the movie yet? What did you think? Are you planning on taking your kids? I'd love to hear your thoughts!

Photo credit for the awesome shot of my son: Jennifer Roberts for the Globe and Mail

I Sent My Son To Work This March Break

I Sent My Son To Work This March Break 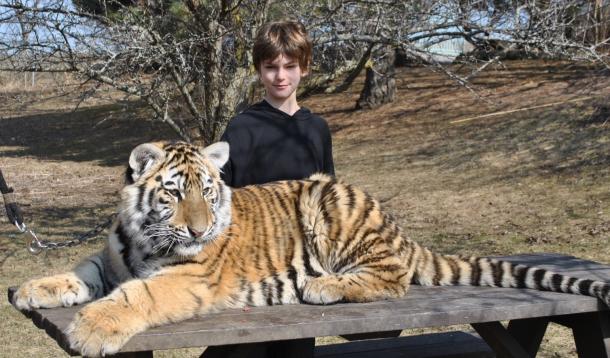 My son is eleven years old, so I figured it was time for him to start learning a career. So rather than sending him to some camp to fool around, he spent five days at Pawsitively Pets Kids Camp, which puts kids who love animals to work and trains potential junior zookeepers. And if the life of caring for exotic animals doesn't pan out, he can always try his hand as a journalist. Here's my son's account of his time behind the scenes at Jungle Cat World through Pawsitvely Pets Safari program: Ahhhh the smell of tiger poo. Well, when you arrive at Jungle Cat World that’s what you’re going to smell. As bad as that may sound it is amazing to see huge cats like lions and other jungle animals like hyenas gulping down a dead chicken. I was lucky to see a wolf catch a live goose in the air. It was amazing! He jumped up and caught it in the air, and then they struggled on the ground for a while. Feathers flew and blood splattered but the wolf had a good meal…and the audience a great show.

You can see lions and tigers…sorry, no bears. But you can see foxes and even a lemur! Another great experience is the camp.

On my first week of March break I decided to spend it as a zookeeper at Pawsitively Pet Camp. It may seem like scooping poop and cleaning cages…and that’s exactly what it is! But there’s more! You meet friends, you meet the wild cats and of course you meet the bunnies! In the midst of all this there are even snakes, lizards, and spiders for you to meet and hold. In zoo camp you're going to clean animal cages, feed and water animals and you even get to hold the animals!! Ever wanted to hold a blue tongue skank? Well here’s your chance! After working hard with all theses animals all day you might get to play a game in the forest which is so much fun…and a REALLY good way to get dirty.

This camp is an amazing way to learn a lot too. I learned that ecto-thermal is the fancy word for cold-blooded animals! Or that a tarantula’s venom will not hurt you because the venom has the potency of a bumblebee’s sting! Did you know that lemurs live in a matriarchy? A matriarchy is when the female dominates the troupe. Lemurs live in a troupe.

You must be wondering who taught me all of this. Well I’m going to tell you. Carl Tordiff is the animal coordinator at Jungle Cat World. He also teaches us everything we know about these animals. Every day after camp I would get a call from both my grandmothers asking if I was eaten and every time they got the same answer. No, I’m fine! The reason I’m fine is because of the amazing zookeepers at Jungle Cat World. Yes we clean a jaguar’s cage every day and yes we feed a lion every day and yes there is an electric fence that ensures that it is safe. So yes it is safe for your kids to come and enjoy. Here's a photo I took from inside one of the serval cages. *NB: This post was written by my son. The only editing I did was spelling and grammar. He also took all the photos except when he was in the shot. And yes I'm proud. And yes I was worried a tiger was going to eat him. And yes I said yes to a summer session. He can't decide between the Mini Vet, Junior Dog Trainer, and Animal Adventure programs.