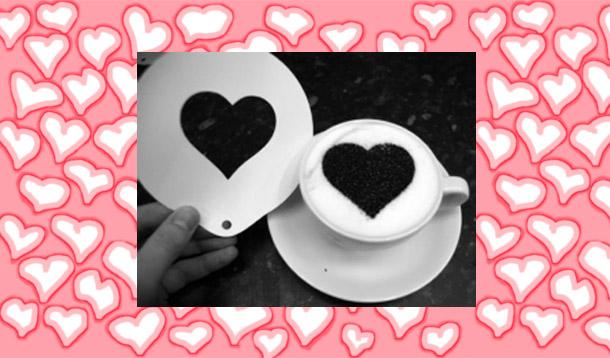 What’s hot, sweet and all worked up into a frothy lather? Either YOU, you romantic minx, or the Valentine’s Day coffee you whipped up for your luvah. *If I ever called my husband “luvah” he’d look over his shoulder to see who I was talking to....

Whether you end a romantic meal with a steamy, creamy cuppa joe savoured in front of a roaring fire or you just want to create a little something special for a Valentine’s brunch, coffee drinks are always a sweet treat.

Here are a few simple ways to add a shot of “I love you” to your favourite cafe concoctions.

Flavoured Syrups: Sweeten your brew with hazelnut, vanilla or raspberry (yummy with cream) syrup. If you’re truly adventurous (I’m talking to you “Minxy”), grab a can of whipped cream and the syrup and continue the party in the boudoir. Clearly I’ve been married too long since this notion makes me cringe just imagining the potential laundry involved... 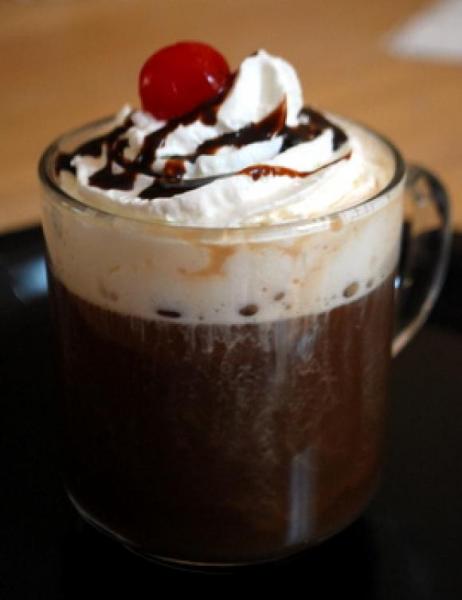 Add a few tablespoons of dark chocolate syrup and a splash of maraschino cherry juice to a mug of hot coffee and stir. Top with whipped cream, chocolate shavings and a cherry.

The folks at Hamilton Beach Canada gave me a Scoop™ 2-Way Brewer to try. It has a programmable timer—essential for zombies like me who don’t actually wake until about 40  minutes AFTER they get up. You have the option of setting the strength to regular or bold brew (like that's a hard decision) and the auto pause and serve function is essential for the days when I literally can’t wait for the pot to be ready.

What exactly makes it a 2-way? If you don’t need a full pot—maybe you just need a large travel mug-full to get you through carpool duty—you can use the 1 Cup Single Serve side which brews up to 14 oz. right into a travel mug.

I have a The Scoop 2-Way Brewer to give away to one of my readers, just in time for Valentine’s Day! Be still my heart.

Leave a comment below stating your favourite way to enjoy a cup of coffee, e.g., black, flavoured, etc. and you'll be entered to win a The Scoop™ 2-Way Brewer from Hamilton Beach Canada.

Yummy Rules and Regs:You must be a Yummy Mummy Club member to win. Click to sign up!  It's free and filled with perks. One comment per member. Entries accepted until Midnight, Tuesday, February 7th, 2012. Contest open to Canadian residents only. Winners will be chosen using www.random.org.

For more information about Hamilton Beach products visit Hamilton Beach Canada online, follow @HBCanadaNews on Twitter and use the #TheScoop hashtag, or visit them on Facebook.

Disclosure: I was given a coffee maker to facilitate this review. All opinions are my own.

This contest is now closed. Congratulations to our winner --> Tonya Cowle

Whether you embrace the romance of or refuse to partake in forced declarations of love, our Valentine’s Day page is filled with articles, crafts, activities, and food to fit your mood.
Category:
Life - Celebrate
Tags:
Valentine's Day Coffee Drinks
Hamilton Beach Scoop 2-Way
Coffee recipes
Coffee maker give away
contest
lisa thornbury
Jan
22
2012

Aye...Robbie Burns Day Is Nigh 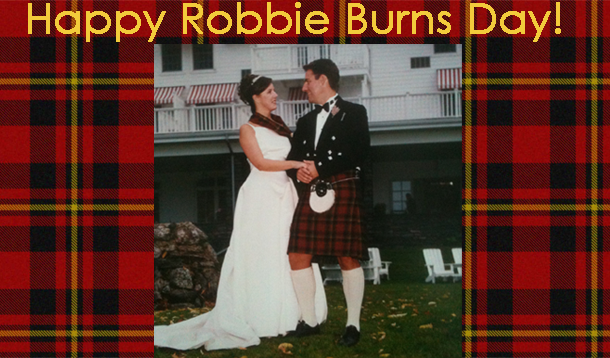 I’m half Scot, half Brit, and married to an Irishman. This means:

I know my way around a tartan tam.

I can highland dance (sort of).

I have a shed load of beer steins.

I have firsthand knowledge about what men may or may not wear under their kilts.

It also means I celebrate Robbie Burns Day.  Well, I haven’t actually blown my bagpipes, so to speak, for several years. Since my Grandma McGreggor passed away, it’s just not the same. She came to Canada from Scotland as a young bride, shortly after my dad was born near Edinburgh, in a castle. By Scottish law, I’m fairly certain that makes me a princess somehow. Anyway, she brought with her a rich heritage and a thick accent, which she kept all her life. Tried as I may, I was never able to replicate her lilt. And trust me, I've tried. My accents always sound like a mix of Swedish and Swahili and some weird clicking dialect.

Robert Burns was a hero to my grandmother and her fellow countryman. He was a poet and Scotland's favourite son. The Bard, as he is also known, lived from January 25, 1759 to July 21, 1796. Those with Scottish ties celebrate his birthday every January 25th  aka, Robbie Burns Day.

Now that my children are getting older, I’m trying to impart upon them the history and heritage of our family. This year, we’re going to resurrect the Burns Supper. Minus the haggis. I’m sorry, I know it’s an integral part of the celebration, but I just can’t {sheep} stomach it. To make amends, we’ll keep the other staple intact – the scotch whiskey. Sigh. If we must, we must.

The traditional celebration begins with The Selkirk Grace (recited by me in my trademark Swedish lilt).

Then it's time for the main course. Since we’re a haggis free zone I'm going to serve scotch pies instead.

Before digging in, the host addresses the haggis scotch pie. I plan to play this video. At this point I figure I’ve already confused my children enough with my horrid accent and absent haggis. It’s probably better they watch a full-blooded Scotsman reciting this Robert Burns’ poem. Also, I like the subtitles since my Scottish is wee bit rusty. {Okay, I read that last line aloud in my best Scottish accent and I have to say, it was pretty good}.

A whiskey toast follows the address and it’s time to eat.

After the meal, guests stand, hold hands and sing auld lang syne {a song that makes me cry every time I hear it….maybe it’s all the whiskey?}.

May the best ye've ever seen
Be the warst ye'll ever see.

Don't let the winter blues get you down 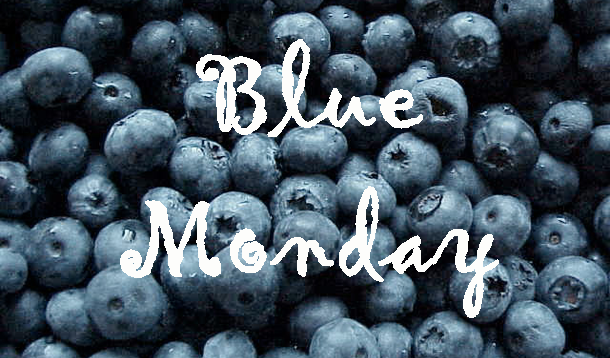 Little Boy Blue come blow your horn. On second thought, go away and take that bloody horn with you.

I hate the colour blue. I don't usually, but this time of year the colour blue is a sad SAD colour. Did you know the third Monday (typically) of January is officially the most depressing day of the year? That's right friends, it's Blue Monday.

But I'm relieved to report that as someone who battles Seasonal Affective Disorder (last year it kicked my butt), I have yet to feel its icy fingers wrapped around my happy place.

Maybe it's the unusually bright and mild winter we've been having? Perhaps it's my commitment to finally get the sleep I need. Or maybe those vitamins I've been taking have actually done the trick?*

Whatever it is, I'm just happy to be happy.

In honour of Blue Monday, here are Ten Edible Blues. Be sure to enjoy at least one of these today, on Blue Monday—let's eat our blues, literally.

Blue Lagoon (made with Blue Curacao...I just had a flashback to 1994 and I liked it)

By the way..."There is no known navy blue food. If there is navy blue food in the refrigerator, it signifies death."  Erma Bombeck

Can't find anything blue to eat? No worries, just put on a blue movie. That should lift your spirits.

*Addendum: This post was written last year when I was a sleep superstar. This year, not so much. Truth be told, I haven't been sleeping well at all... hence a new blue food item, blue sleeping pills. Sigh. More to come on that soon.