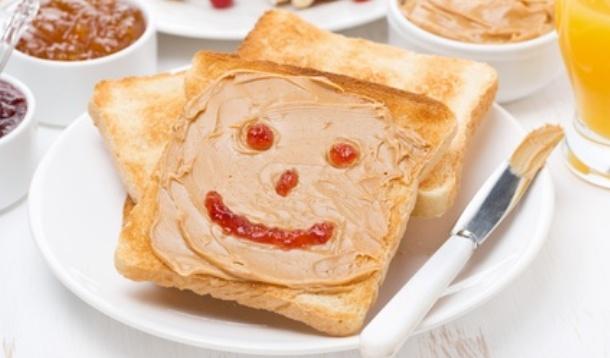 A new long-term study has released results that indicate feeding high-risk kids peanuts earlier can actually prevent the allergy. And I'm not happy. I mean, sure, I'm delighted that for every child going forward, these new findings mean peanut allergies could be reduced drastically. I'm elated that studies are being done to limit allergies. I'm just really, really sad that this came five years too late for us.

In recent years, studies seemed to indicate that delaying introduction of peanuts was unnecessary, even detrimental, but even that was too late for my son.

The truth is that Mason (who turned five in December of 2014) has never eaten nuts or peanuts (that we know of). He was born with multiple food allergies, has had other food reactions, and we were told to avoid peanuts and nuts. His skin prick tests for peanuts are positive, though his blood results were negative. So who knows, really? We can't know he's truly allergic without an oral test and they won't send us to Sick Kids Hospital for that oral test until the skin prick is negative, too. It's frustrating.

Why Overreacting to Your Child's Allergies Isn't Helping

But we can't always know the true answers, can we?

This recent study will change everything for parents of kids who are at risk of peanut allergy - those with siblings or parents with the allergy, those with other allergies, etc. The "LEAP" study (Learning Early About Peanut Allergy) studied more than 600 babies who had severe eczema (like my son did!) an egg allergy (like my kid!), or both. These are strong indications of risk of peanut allergy, and these were part of the reason we were told to avoid peanuts.

The participants were given small amounts of peanut protein, and then those who had no reaction were broken into two groups. Group One kept children on a peanut-free diet whereas Group Two was instructed to feed babies small amounts of peanut protein across multiple meals every week. It turns out, the kids who were regularly exposed to peanuts had a far lower risk of developing an allergy by age five. Only 3.2% of the children who regularly ate peanuts developed a full allergy, compared with 17.2% of the peanut-free diet group. That's a giant difference! 80% in fact.

And while I am so happy for future babies, I'm so sad my son missed this window. For him, each year brings new testing and so far, more waiting. Will he ever outgrow the allergies? Nobody knows. We still don't know why he has them, how to prevent them, or why this new study works, but the fact that there is positive news for the future is a silver lining, for sure. 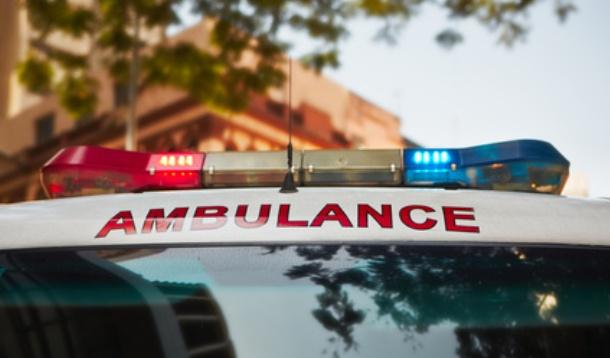 Sensational stories in the media and uninformed people are a combustible mix when it comes to an already-heated topic like handling food allergies. It's so easy to get our backs up when we hear another parent scoff at the inconvenience of food bans, or read about how other people are reacting to "jokes" in commercials that mock serious illness. Allergy advice varies, it seems, from allergist to allergist, so how, as parents, do we really know just how cautious we need to be? Are we being careful enough? Are there further steps we need to take? Why not just take them all; better safe than sorry and all that!

Don't Have Allergies? Don't Feel Smug, You Can Still Develop Them

Here's an example: last year, I administered an EpiPen to my son because I feared he was having a delayed allergic reaction. He was not, but I had already given him the jab and called 9-1-1 before we identified that. He needed no further inspection once EMTs determined that it was not a reaction. No ER visit, no ride in that cool "ambliance".

In any case, the EMTs, and later our family doctor and our allergist assured me that I had done the right thing, and that he didn't need further medical attention. But in a Facebook group for parents of nut- and peanut-allergic people I'm in, a similar situation came up. A child accidentally injected herself but wasn't taken to the hospital and so. many. people. were in shock (and angry!) that this hadn't been done. I spoke up gently saying that if there has been no allergic reaction, we were assured no hospital trip was required, and my wrist was slapped by another allergy parent who felt it's always better to go to the ER.

Is this whole "better safe than sorry" mantra doing us more harm than good? I argue that yes, it sure is. And here's why.

We can't even decide whether allergies can be rated on severity scales, so how do we really know what level to set our freak out meters to? My son's allergist says there is NO test for severity, yet I've heard from others that their allergists indicate that certain blood tests do show it. If the professionals who have dedicated their lives to researching this stuff can't figure it out, what hope does the average parent have? Very little. And who wants to risk the life of their child? Nobody. So what do we do? We set that freak out meter on high, that's what.

This paper gives a remarkable timeline of events in the evolution of the "Peanut Panic" and I think it's worth a read. Of particular interest is a 2010 study by RAND Health which addressed the confusion over "the prevalence and severity of food allergies" blaming "anecdotal self-reporting." In closing, author Miranda R. Waggoner states, "No doubt a severe and serious individual health crisis when anaphylaxis occurs, the peanut allergy as a population health problem has become contested ground. More than a story of panicked parents and sensationalist media, peanut allergy discourse was co-constructed by multiple actors and institutions over time, with a range of social consequences." One such consequence, I fear, is a social backlash.

With this whirlwind effect, peanut allergies have stirred up the fear in everyone. When education and knowledge would be more useful, instead we have terror and overprotection.

The truth is, my son has to go out into this world and live. He has to touch door knobs, sit in restaurants, kiss loved ones, eat food. He needs to have the tools necessary to advocate for himself and make informed decisions. And instead of showing him the fears I have (and of course I have those fears!), I show him strength and give him power.

We don't panic. We prepare.

We don't get angry when others make mistakes, we take the time to educate them about food allergies. We teach people that proper hygiene is the best way to protect others. We teach them that a little compassion goes a long way. We tell them what it's like to not be able to eat cake at a party, or to worry about flying in an airplane. But we don't set our family freak out meter on high and rush headlong into society expecting everyone to cater to us.

My fear IS the allergy fear. I worry that because allergic parents are busier freaking out than educating themselves that we're doing our community more harm than good, and I wish that would end. I wish the sensational headlines would end, and that we could report positive stories, too.

With the current worries about the measles epidemic, I've been contacted by a number of people regarding this tweet: 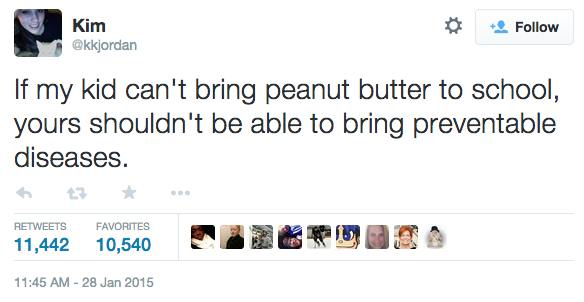 My first reaction was negative. This insinuates that allergy parents are the ones not vaccinating, doesn't it? Does it, though? I really don't know. What I've learned in dealing with allergies for 5 years is to never react in haste. So I sat and thought about that awhile.

What I do know is that I vaccinate my kids, and I would personally prefer to have peanut butter in my peanut-allergic kid's classroom than measles. Because I can teach my son how to avoid peanut butter, but I can't teach him to avoid measles.

And I think that's the takeaway here: we need to slow down, think about these concerns, and really decide what we need to panic over, and where our energy is best spent.

I know mine is best spent helping to educate people about the reality of food allergy life. Where is yours best spent?

They are NOT the same premise 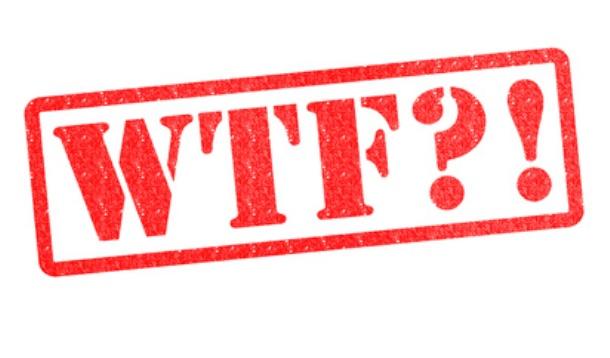 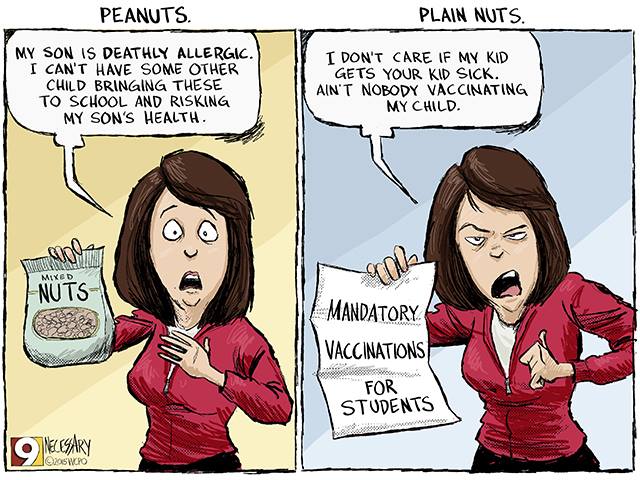 The cartoon insinuates that the parents who are pushing for peanut and nut (or any food) bans are the very same ones refusing to vaccinate their children. The character in each photo is identical, and thus implies that the same people forcing you to protect their kids from life-threatening food allergies are the ones who are refusing to protect your kids (and their own) against things like the measles.

This is not true.

Maybe some allergy parents are also refusing to vaccinate, but this isn't the case across the board. (And maybe some cannot because their child is allergic to something in a vaccine but we are not, as a community, the ones who are refusing to vaccinate.) I am not the one bringing measles to the masses while refusing to allow your kid to eat her beloved PB&J at school.

You may not see the insinuation here, but it's a direct finger pointed at the allergy community. The rage and hatred I see online when discussions about food bans happen is unreal. People are extremely upset that one allergic child can force a whole classroom to do without nuts. I understand, I do. My child is an inconvenience to you. My child should live in a bubble. My child is a genetic weak link. My child should be banned from school.

But I didn't choose for my son to be allergic. I did choose to fully vaccinate him, though. This cartoon woman is not me.

Those who choose not to vaccinate their children are not a representation of those who deal with life-threatening allergies daily. If a school protects those with allergies, I believe they have the responsibility to protect against these diseases, so is that the conversation we need to be having?

I think this cartoon is wholly unfair, and will serve to fuel the fires against the allergy community by taking what was originally a comment comparing protecting an immunocompromised child in school to protecting one with food allergies out of context.

It would be amazing if these conversations raised constructive, helpful ideas to solving these issues instead of divisive, accusatory arguments, although I'm not even sure that's possible. What I do know is that cartoons like this do nothing positive for anyone.