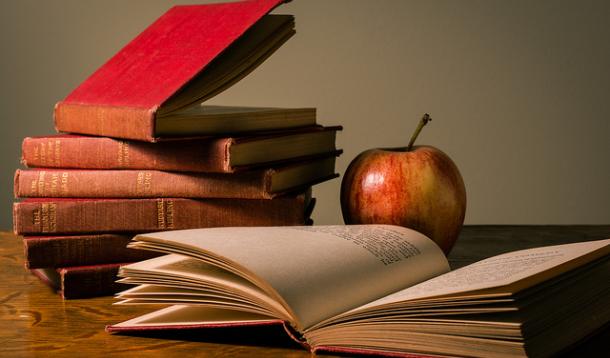 There are some things I never thought I would do as a mom. This was one of them. Homeschooling is another.

Not that I have anything against parents who choose to turn their living rooms into classrooms, it's just one of those things I thought wasn't for me, like spinning classes or tofu. After all, teachers are trained professionals. I couldn't do their job any more than I could pick up a paintbrush and expect to slap the Mona Lisa's likeness onto a canvas.

But then, you never know what you're capable of until you're suddenly forced to do it. And that day came recently when - for reasons I won't go into here - it was politely suggested that my 7 year-old finish the school year elsewhere.

Thus a teacher was born. Suffice to say, the learning curve has been steep, and not only for my son, either.

On Monday, the alarm clock never went off. I rolled over in bed, soaking up the extra 20 minutes in bed. There was no need to pack a lunch or a backpack. No harried drive in rush-hour traffic. Nope. I lingered in my PJs and savoured my coffee while it was actually hot. Hey, I thought, maybe this gig wouldn't be so bad after all...

First thing I did was grab a handful of markers and draw up a schedule. If I was going to stay sane through this experience, we'd need some structure to our day. I tried to create a timetable that was roughly in line with what my son had been doing at school: language, reading, and math units balanced with free time and an hour in the afternoon allotted to "life skills/excursion" - which is mom speak for "errands." I had to be realistic. I couldn't magically whisk away all the appointments and tasks I would be doing if he was still at school. Plus, I reasoned, this was Real Life. I could teach him stuff if, say, we were buying groceries. What did they call that, incidental learning?

Anyway, it should have been smooth sailing. I already had his textbooks and jotted down which pages he should do. I also picked up a full Canadian curriculum from Scholar's Choice, which made lesson-planning a no-brainer for this non-teacher teacher. Despite the distractions of toys and TV, I'm proud to say my son stuck to the schedule. And I was even prouder to say that I could manage the math, which has never been my forte.

The morning went like clockwork. Half an hour of journal writing using my old laptop. He enjoyed typing a paragraph in Word, and produced way more than if he were handwriting. I was pleased. He knew how to use apostrophes and hyphens better than many grown ups out there. A snack break, then he soldiered on. We snuggled up on the couch and cracked into a new chapter book about an art heist set in Paris. As he read aloud, I sprinkled in some questions to test his comprehension. I enjoyed the story as much as he did, describing past visits to France and showing him pictures of the Louvre.

Things took a turn for the worst by late morning, though, when I allowed him the iPad for free play. A huge meltdown ensued when it was time to move on and get back to lessons. Suddenly I was not only a "mean teacher" but a "bad mommy." Sigh. How seamlessly had one role morphed into another. By Tuesday, the schedule had been rejigged, with the iPad slotted in at 4pm - after all the day's lessons were over. This proved to be a genius bargaining tool!

Getting my guy outdoors was another sticking point. Other than the odd jaunt around the block on his scooter, or shooting a few hoops in the backyard, Phys Ed was like pulling teeth. The more time my guy spent at home, the more inclined he was to stay there. Meanwhile the four walls started to cave. My own case of cabin fever grew acute. No more impromptu jogs. No more Starbucks dates with friends. I felt shackled indoors, cursing the very schedule that kept us on track. I tried to squeeze in some work, only to be interrupted every few minutes. Even when I snatched five minutes to myself, I couldn't think coherently. During free play, my son wanted my full attention. He missed his school buddies. There were no other siblings at home to engage him. Suddenly I was all of his peers rolled into one. I was THE playmate.

In many ways homeschooling feels relentless, but it's not impossible. It takes an almost compulsive level of organization and discipline. So far it's been enjoyable, and I honestly hadn't expected that. Every day I'm learning something new, and although I feel the sacrifice acutely, I'm relishing this bonus time spent with my son. It may not have been my choice, and it's not for everyone, yet I will never look back and regret the time I spent homeschooling.

Having said that, when September rolls around, I'll be ready to greet his new teacher with open arms and a new found respect.Image: