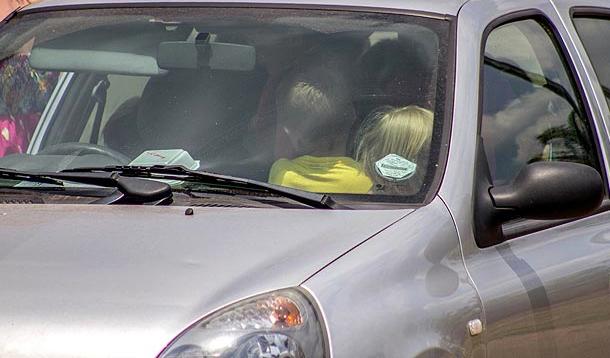 No, it's not some wacky ad for Renault Clio but a REAL nursery teacher in South Africa, who jammed 19 little ones into her car for a school trip.

According to an article in the UK's Sun, it looks unlikely that any of the kids contorted in the car are belted in.  When teacher Melanie Minnie was pulled over there had to be at least three kiddos in the front seat, ten in the back and allegedly, six in the trunk! This, on the back of our recent post on car safety.

The kids, who attend Rietfontein nursery school, in Gauteng, were on their way to a local burger bar when the cops pulled the car over after a passerby tipped them off.

“[The children] were excited at first but after a while they started to get a more worried and cried,” said onlooker Mr van Heerden.

Incredibly this was the second car load Ms Minnie had dropped off at the burger joint. The first time, a dozen kids had piled into Clio.

“This is the first time we went on an outing - and the last time,” said Ms Minnie—who was reportedly fined a pathetic $150 for endangering all those lives—in South Africa’s Afrikaans language Beeld newspaper.

Fearless Felix Does it 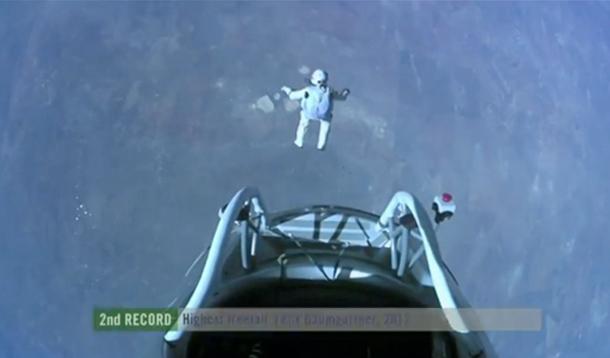 How was your Sunday? For Felix Baumgartner it was a little more thrilling than all that. The so-called 'extreme athlete' skydived for 24 miles from the stratosphere before landing in the New Mexico desert.

From his capsule at roughly 128,097 feet above the earth, Baumgartner free-falled for most of the nine-and-a-half-minute descent, breaking the sound barrier to the euphoric cheers from those in the mission's control center in Roswell, N.M.

During the jump, daredevil Baumgartner—known as Fearless Felix— hit a record speed of 690 mph.

According to an article in Huffington Post, any rip in his pressurized suit could have exposed him "to a lack of oxygen and temperatures as low as minus-70 degrees." Needless to say, the stunt could have ended very badly, hence the 20-second delay in the live stream on the internet.

But though Baumgartner may be celebrating in true style, this jump will be his last. He plans to live the 'quiet life' with his girlfriend, flying rescue helicopters over mountains instead. As you do...

Penises: Why Size Really DOES Matter

To Some Women, Some of the Time

Penises: Why Size Really DOES Matter

So science is finally backing up what we have long suspected: penis size actually matters, but only for “some women, and for certain types of orgasms.”

According to an article in the Huffington Post, women who frequently orgasm vaginally, as well as those who prefer penile-vaginal penetration, tend to favour men with larger penises. So say the findings of a study recently published in The Journal of Sexual Medicine.

"Male anxiety about penis size may not reflect internalized, culturally arbitrary masculine stereotypes, but an accurate appreciation that size matters to many women," said researcher Stuart Brody, a psychologist at the University of the West of Scotland.

Of course not all women need or want long penises. Some women prefer clitoral to vaginal orgasms. As with everything, sex has a lot of variables.

Needless to say, we women are a complicated bunch, especially between the sheets. Some of us come while performing abdominal exercises leading to “pleasurable spasms at the gym.” Some don’t come at all. Our lady bits are enigmatic at best. Think of that elusive G-spot.

Brody, however, believes a psychological correlation is responsible for a women’s ability to orgasm by vaginal stimulation alone, including a “better relationship quality.”

When he and his colleagues asked more than 300 Scottish university students about past sexual encounters, 33.8 per cent preferred longer than average (defined by a U.S. dollar bill—6.1 inches (15.5 cm) long) when it came to the frequency of vaginal orgasms.

Whereas 60 per cent said size didn’t matter, and a 6.3 per cent favoured the shorter penis.

"This might be due at least in part to greater ability of a longer penis to stimulate the entire length of the vagina, and the cervix," said Brody.

But is the vaginal orgasm the holy grail of sex? Does it really matter how you come, as long as you get there?