"DO YOU REALIZE WHAT IS HAPPENING TO ME RIGHT BEFORE YOUR VERY EYES?" 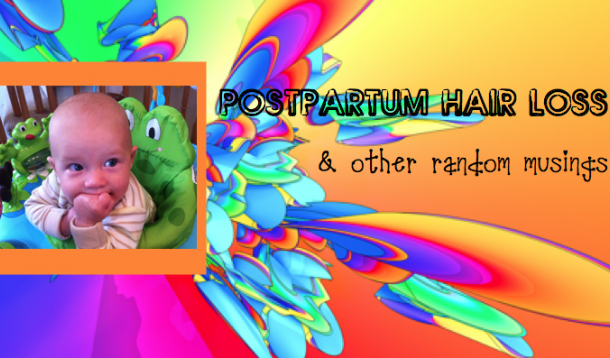 I can't decide if I want to write a blog post about postpartum hair loss, or about how cute and advanced my son is.

The two topics don't go very well together either—so it's not like I could seamlessly go from one idea to the next. It would be like serving lasagna with a side of curry for dinner. They just don't jive.

Neither topic is worthy of a full blog post (okay—that's a lie. I could write a ten million word essay on how adorable and amazing my son is, but you'd all probably stop reading after a few minutes.)
I suppose I could choose a different topic all together...One not even related to motherhood. Like bellybutton lint, or fashionable sunglasses. But I know dick-all about either topic, because I have an in-betweenie (not an outie, but not an innie) so I never get lint—and I tend to pick up on fashion trends a season or two (or ten) later than the average bear.
Ohh—bears, I could write a blog post about bears! But that would be interesting to just about no one (sorry David Suzuki, I know you'd probably read it. That's a lie. You definitely wouldn't read anything that I write about bears. My knowledge begins and ends with "that's a black bear, that's a brown bear.")
Do you see what is happening here? Do you realize what is happening to me right before your very eyes?
My brain has turned to mush. Mommy-mush-brain. Google it.
I'm trying to write a blog post, and it's 8:30pm. My son is asleep, and I have no energy left to do anything funny, productive, or funductive (something that is both funny and productive). I guess I could have sex with my husband. That would be funductive. The funny part would be me trying to look sexy right about now...
*insert whistle sound as I do a sexy stripper move in my striped tank top and clashing striped PJ pants with a saggy ass*
I think I should just quit before I'm ahead, and turn this blog post into a picture book. That's where I'm at folks. Replacing WORDS with PICTURES.
That reminds me of a pet peeve: you're not an AUTHOR if you've had a PICTURE BOOK published.
I'll show you a picture of my postpartum hair loss and show you pictures of my incredibly cute and advanced son.
On second thought...I'll skip the hair loss pics (who needs to see a brush full of hair?) but take my word for it: I could make wigs for balding men daily with the amount of hair I'm losing. And it always seems to collect in my ass-crack after a shower...?? Why? To make me feel even sexier? I suppose so.
Okay, onto cute pictures of Cole!
xo 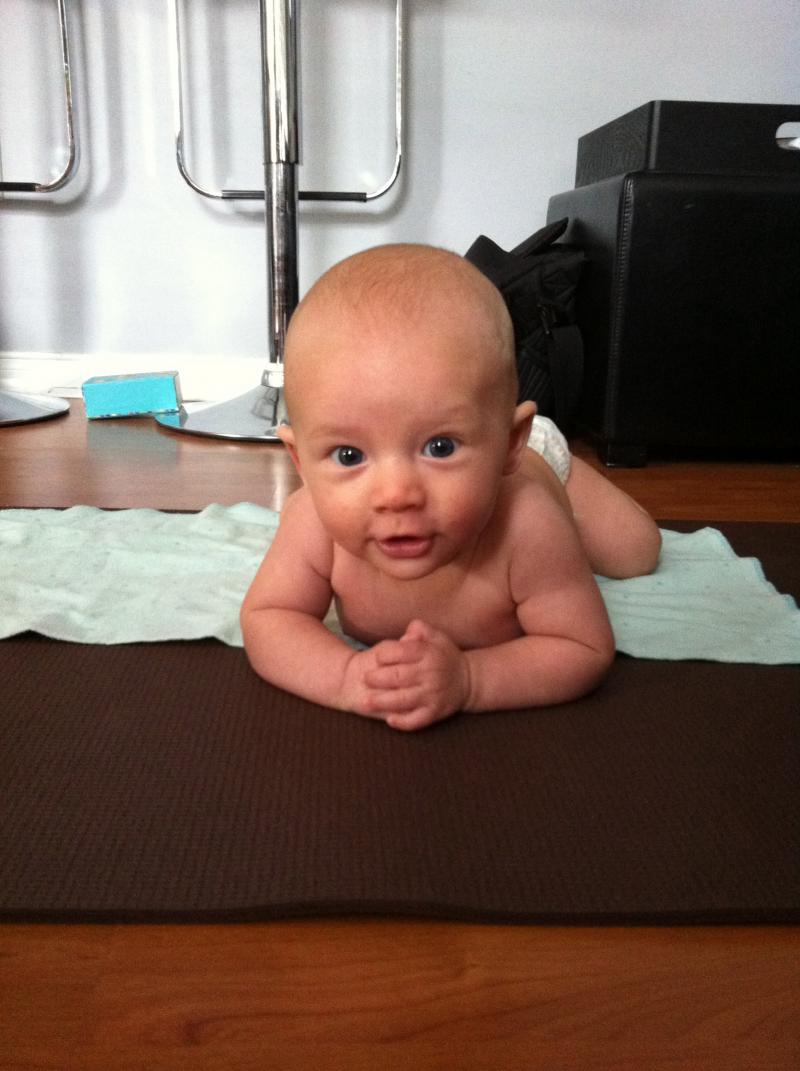 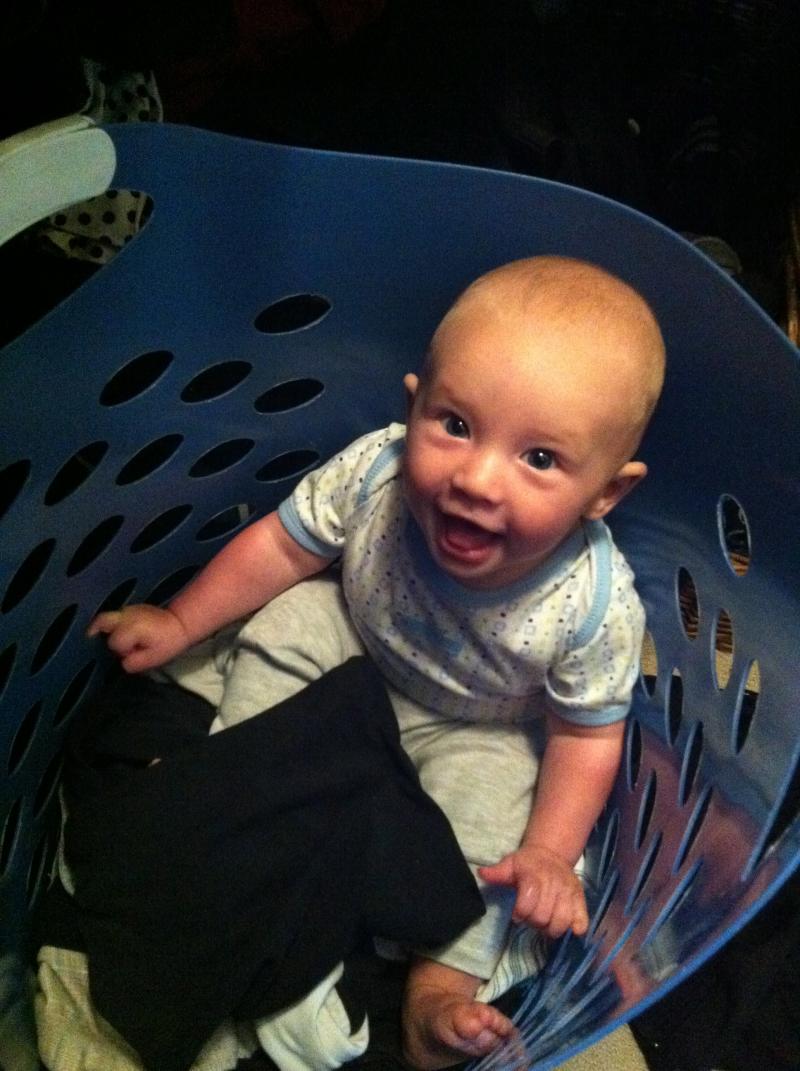 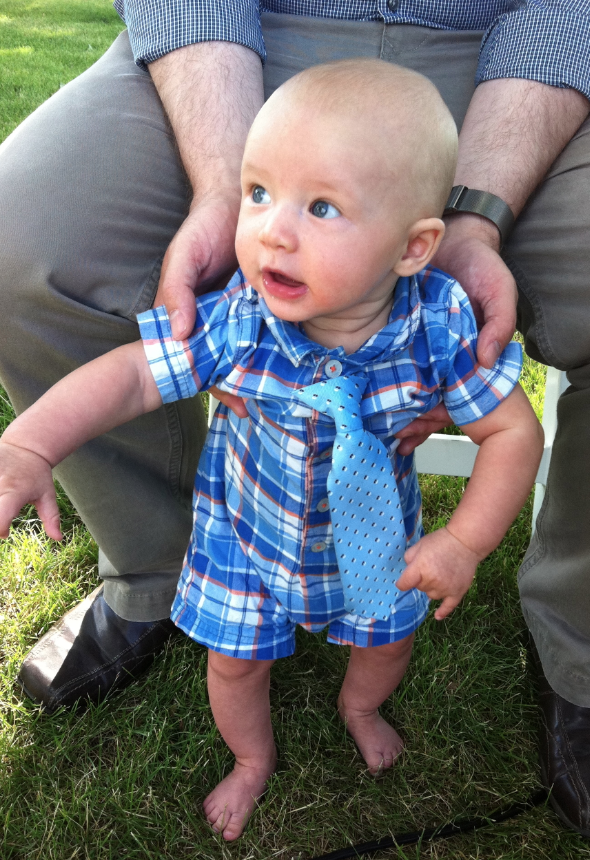 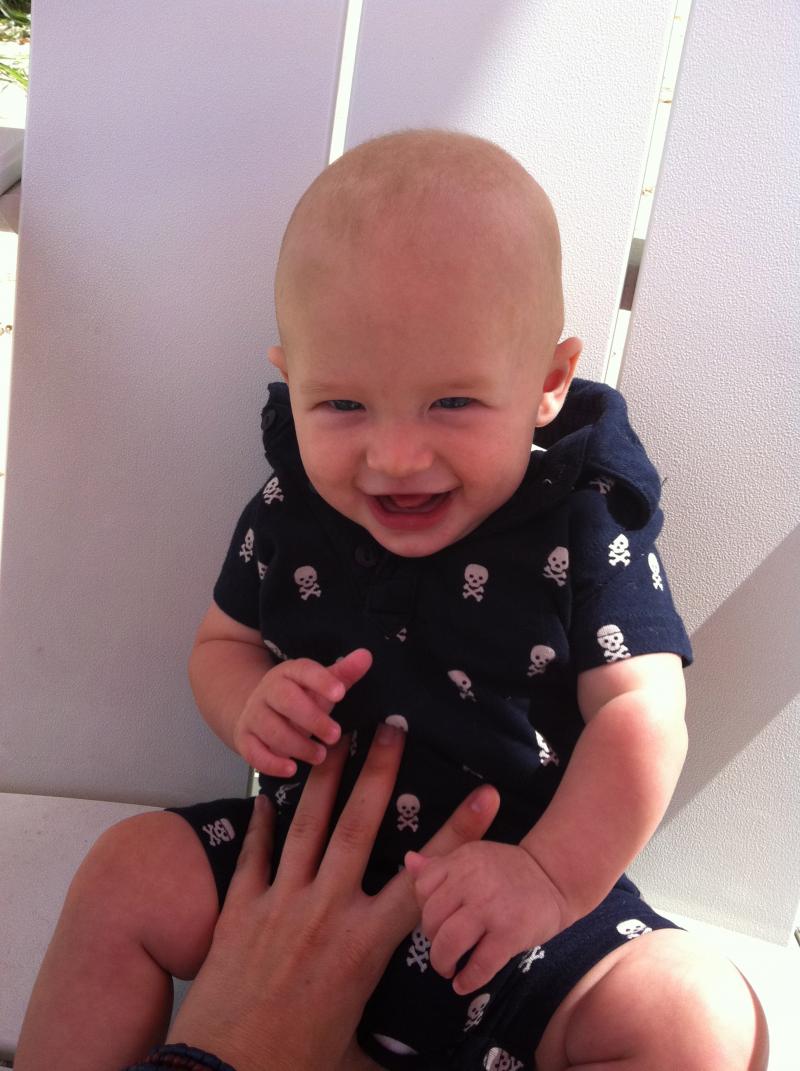 WOULD YOU FOREGO THE FORESKIN? 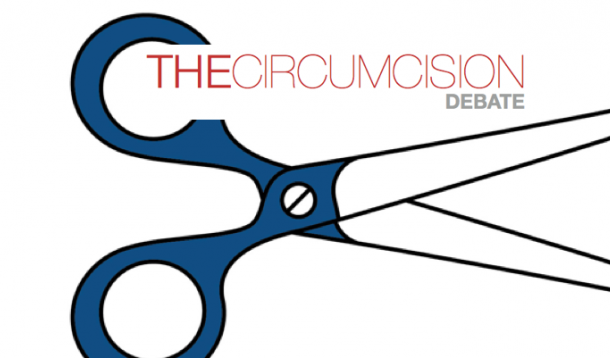 Let's just dive right into this controversial topic, shall we?

To circumcise or not to circumcise—that is the question.
My husband and I disagreed about this for my entire pregnancy: I was on team "leave my baby's penis alone" and he was on team "I want my son to look like me." I was secretly hoping for a girl just so we didn't have to decide ;)
It was the ONE THING we could not agree on. And well...guess what? We had a boy!
All of the sudden I wished I was Jewish. "We're doing it for religious reasons." End of conversation. Whenever you answer someone with that line, that person shuts up. No one wants to offend your religion.
"Why are you eating more cake Jen?"
"It's for religious reasons."
"Oh, okay."
See what I mean? And I've always FELT a little Jewish. I like the idea of not mixing milk with meat, and I love bagels (I just googled "bagels + jewish people" to see if that comment was racist, by the way).
ANYWAY, back to the foreskin: let's cut to the chase (pun intended) and you can judge me all you want, but we decided to circumcise our son.
*insert gasp of judgement here*
We had a pro and con list for each, here are the pro's:
PRO UN-CIRCUMCISED PENIS
-stays in it's natural form, the way it came into this world
-it's deemed medically unnecessary
-you don't have to pay $$ to get it done
-more sensitive penis
-you can nickname your penis snuffleupagus
PRO CIRCUMCISED PENIS
-you don't need to worry about cleaning beneath foreskin/junk building up
-you don't need to worry about the skin tearing and needing to get it done later in life when it'll hurt more and you'll remember it
-less chance of contracting/transmitting STIs (just always use a condom and you don't need to worry about this either way, I'm sure)
-If the Dad is circumcised you can happily pee together and have twin penises. Wahoo. Helmut warriors UNITE!!!
There are many more pros you could add to each of these lists, but at the end of the day—I joined team circumcision.
It's actually kind of funny, because in the hospital room the day that Cole was born, my husband actually said "I've decided I'm okay not to circumcise." And I looked at him and laughed, "I have actually decided I'm okay to circumcise!" So we left it to a coin toss (kidding).
Anyway, I hope Cole is happy with our decision later in life. I hope that he doesn't get teased in the locker room due to his lack of foreskin. I suppose I could crochet him a little hood for his penis if this is the case. People do that, right?
Please follow me on Etsy for future penis-inspired crafts...
;)
(JK—I don't have an Etsy account. But I WAS a penis for Halloween one year...and a vagina the next. I made my own costumes and everything. More on that later...)
Category:
Family - Babies
Tags:
circumcision
debate
foreskin
new mom
babies
parenthood
jen warman
Jul
12
2012 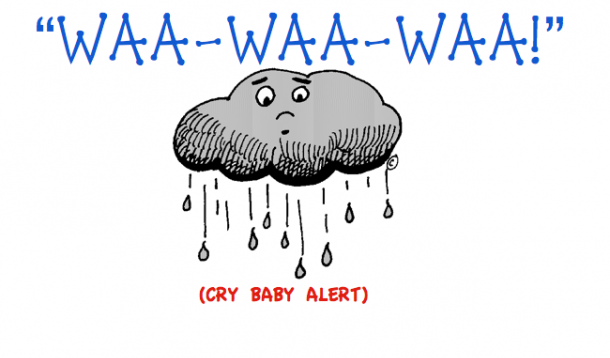 Today I'm having one of those days where I feel like a shitty ass parent. I just feel so glum (yes, I said glum) and I swear Cole can feel it. I've sung many songs, gone for some walks, and we even had a play in the park: complete with airplane rides. But I just feel like he just knows that today isn't as fun as other days. I once told my husband that I thought Cole slept so much that day because he found me boring. He laughed and reminded me that babies need to sleep. I still think I was boring him...

Anyway—I don't know what it is exactly. I think that I'm starting to feel a little disconnected...from myself. Unsure of what I want to put my energy into (aside from Cole) and unsure of what my future holds. I feel indecisive and uninspired.
I'm starting to get frustrated that my son only sleeps two hours at a time, and that he still can't "settle himself to sleep." I can't just let him cry it out, and the baby whisperer's methods lick my balls. (Okay, I'm sure they work for many people, but I can't seem to get her techniques to work for me). Maybe I'm just a quitter. A big fat quitter.
I feel like I could take a big fat quitter temper tantrum right now—except I don't even have the energy. I'm quitting my big-fat-quitter temper tantrum before it's even begun. Sigh.
My brain feels scattered, and so does my house. Laundry is half-done, the dishes are half-put-away, and I got half-dressed today..
My girlfriends are coming over for dinner tomorrow night...at 7:30pm. That is usually when Cole goes to sleep and I join him an hour later. They can't get here earlier because they all work late. And I don't want to become a shut-in who doesn't see her friends, so I'm sacrificing sleep.
My husband is going away to Vegas for 4 days for work (Who goes to Vegas for WORK? Jerk). He's also going to see a Cirque du Soliel show while he's there.
Well, Cole can put his feet in his mouth now, so I guess I'll just dress him up, paint his face and play some crazy music in the background. It's sort of the same thing.
My posture also sucks (I'm hunching while I type this) and I'm too lazy to fix it right now. I'm comfortable.
I haven't been doing enough kegel exercises and my core strength could really use a boost.
Hm, what else? I'd really like to end this bitch-fest-pity-party on a high note...
...
This sucks, I can't think of anything awful to end on, and I'm already feeling guilty about venting such negativity. In the grand scheme of things, I know how  fortunate I am, and I truly love my life. And in all honesty...90% of the time I'm blissfully happy. I'm surrounded by great people who love me, and I have the most amazing son in the world. I cried today just looking at him. How did I make such an incredible little human?!?
See, this SUCKS! I'll never be a professional comedian because even in my "darkest hours" I perk up and optimism starts showing its happy little fucking face.
Sigh. I guess it's a good thing to suck at being negative? Self-high-five to that.
;)
Category:
Family - Babies
Tags:
bad day
cry baby
blues
baby blues
new mom
comedy
jen warman