5 Tips To Get Over Your Fear Of Public Speaking 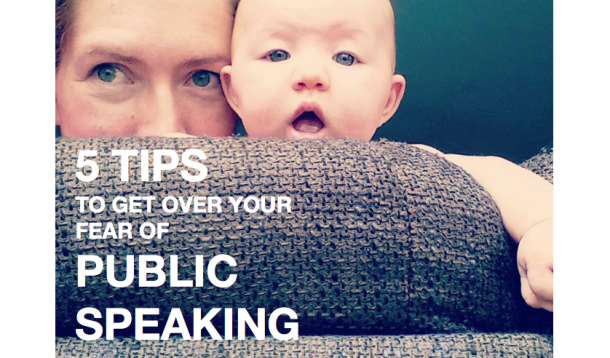 When people find out I've done stand-up comedy, nine times out of ten they say, "Holy shit balls mother fucker I could never do that in my life! That's my worst fear!" (Usually they don't swear, but I'm having 1/2 a glass of wine as I write this and am feeling like a badass.)

But when people say things like this, it actually surprises me because I've never really had a problem with public speaking. I used to love giving speeches in elementary school. Yes, I know. Super-geek, right here. In fact, I can still remember my grade 4 speech that won me third place at the Legion. Not that I'm bragging (I'm totally bragging). My speech was about my food allergy to MSG — this was the opening line:

Again, try not to be jealous of my mad speech writing skills. I wore a green corduroy dress with a white lace collar and my hair in two French braids when the local newspaper came to photograph me and my shiny bronze medal — just to give you the full picture.

So if you're about to embark on a public speaking adventure (hopefully it's not for a fourth grade speech, if so — I apologize for cursing), and you're shitting your pants with fear (sorry again) Then here are five tips to help you get over your fear of public speaking. I hope they help!

1. PEOPLE IN THE AUDIENCE WANT YOU TO SUCCEED. Believe it or not, when you take the stage to deliver a speech, the people in the audience are most likely nervous for you. We all know what it's like to take centre stage, so there is a natural empathy that exists in the audience. Unless people are absolute d-bags, they don't want to see you stutter with fear and forget what you're about to say. They want you to be relaxed, so that they can relax. Whenever I see someone on stage who is struggling, I just want to run up and give them a hug (and a shot of tequila)!

2. PRETEND YOU'RE CONFIDENT. Even if you're scared out of your mind, pretend you're not. Lie to yourself. Say it out loud until you believe it. "I'm going to rock this!" Confidence is sexy people! Pull your shoulders back, hold your head high, and take up as much physical space in the room as you can. You. Are. Amazing.

3. DON'T MEMORIZE YOUR SPEECH. If you've written a speech word for word and are trying to memorize it, you're only going to stress yourself out and sound like a nervous robot when you deliver it. And you'll forget lines. And stumble. It'll be awful. So instead, write bullet points about the main things you'd like to talk about. Practice your speech out loud over and over again. As many times as it takes to feel comfortable. Do it in front of a mirror. Deliver it to your dog, your cat, your partner, the mailman — anyone who will listen. Before you know it, you'll have a smooth flowing speech that sounds completely natural!

4. BE HONEST. BE VULNERABLE. I would say that in most situations it's okay to admit to your audience that you're nervous. If you're shaking and feel like you're about to puke and absolutely can't focus on anything else, you can say, "Wow, I'm really nervous. You're all staring at me. This is terrifying." People will probably sympathetically chuckle and then send you even more "I want you to succeed" vibes.

5. THERE ARE WORSE THINGS Even though I've read that some people are more afraid of public speaking than dying (I don't understand that), just remind yourself that there are worse things than delivering a speech. Like...delivering a baby. Sideways. Or getting anally probed by aliens. I'm pretty sure those things would be worse. And if not? They'd make a killer intro for your next speech!