A Call to Ban the Bouncing 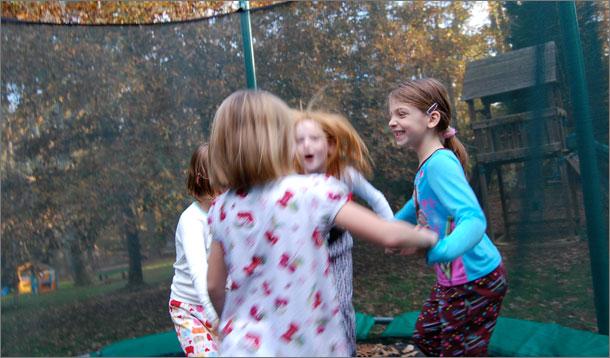 Kids love jumping. It's an immutable fact of nature. But is a trampoline simply an accident waiting to happen?

Seems so, according to an article in the Huffington Post, which revealed the American Academy of Pediatrics (AAP) "strongly discourages" trampolines in both residential and commercial use. The AAP echoed a similar statement issued by the Canadian Paediatric Society earlier this year.

"The key thing is that three-quarters of injuries occur when there are multiple users on the mat," Dr. Michele LaBotz, co-author of the AAP statement, told the Huffington Post. "And especially when you get those disparate sizes — you get a real big person and a real small person — the small person is much more likely to get injured, 14 times more likely to get injured."

Those injuries range from the moderate fractures, dislocations and sprained ankles to the more severe, head and neck trauma, with an estimated one in 200 incidents leading to permanent neurological damage.

With their soft mats, trampolines lull us into a false sense of security. But even protective netting will not prevent around two-thirds of injuries, which occur on the central mat, warns LaBotz.

In Canada, more than 4,000 cases of trampoline injuries were treated in emergency rooms in the Canadian Hospitals Injury Reporting and Prevention Program (CHIRPP), though clearly that figure doesn't account for all injuries sustained. The article further states that more than 40 per cent of those injuries involved five- to nine-year-old children, with more than eight per cent requiring hospitalization.

And the push for physical activity in the battle against childhood obesity could see those figures jump. But the message is clear. As far as pediatricians are concerned, there is no safe way to use a recreational trampoline.

Seeing those catalogue images of whole families bouncing around together makes LaBotz and her colleagues cringe. "And parents are struggling now to pull their kids away from the computer and the video games. And it's easy to see how it might seem like a good, fun, relatively inexpensive thing to do."

A lot of hot air and pediatric paranoia, or is it high time we heed the warnings and banish the bouncing?

Snoop Dogg Dopes Out With Son

The Family That Tokes Together...

Snoop Dogg Dopes Out With Son 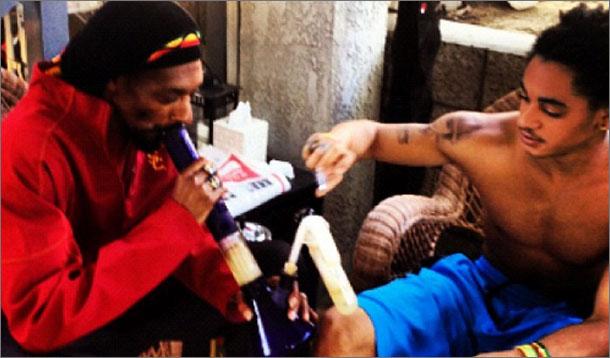 Seems that unlike Sir Paul McCartney, rapper Snoop Dogg hasn't changed his ways for fatherhood, and rather has adopted the Can't Beat 'em, Join 'em tact with his 18-year-old son, Corde Calvin Broadus (a.k.a. Spanky Danky).

Snoop got some flak—and praise—after Corde posted a picture of father and son bonding over a bong.

If Corde's Instagram and Twitter accounts are anything to go by, dope is the mainstay of the day to day at the Dogg house. Needless to say, the pictures have divided the media. Is Snoop a 'cool dad' for smoking up with his son in his own home? Or should he lead by setting a (better) example.

For a start, he might help his son avoid tweets like this: “Wherever I'm going jus know that I'm smokin, I'm going I'm rollin I'm going IM Gone...I'm sooooooo stoned.”

And this: "Done with high school still gettin high too"

Is smoking up with your legal-aged son any different than say, sharing a glass of wine over dinner? Spill it. 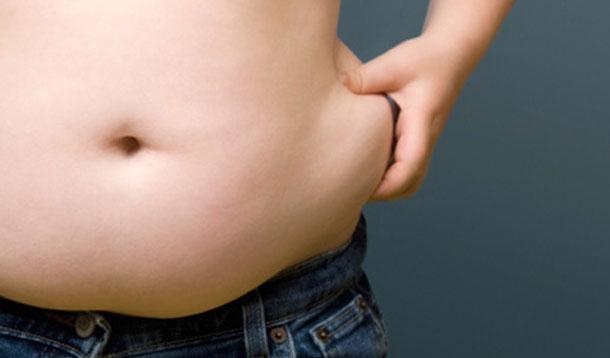 We know that childhood obesity is a problem here in Canada, but just how much of a problem? A big fat one, it turns out. According to Stats Canada's latest figures: one in three.

That's right, as reported in a Huffington Post article, a third of Canadian kids are overweight or obese, based on World Health Organization's (WHO) recommended weights for youth around the world. Based on data collected in the 2009-2011 Canadian Health Measures Survey, 31.5 per cent of five to 17 year olds—around 1.6 million young Canadians—are defined as overweight or obese.

Interestingly, the younger set (aged between five to 11) were heavier than those between 12-17, with boys outweighing girls, but not in a good way. Boys are heaviest within the five-to-11 age bracket, with "three times more boys considered obese (19.5 per cent) than girls (6.3 per cent)." That gap closed as kids entered the teen years.

But according to Kim Elmslie, director general of the Centre for Chronic Disease Prevention and Control at the Public Health Agency of Canada, the discrepancy between the sexes is neither here nor there. Previously measurements were based on the International Obesity Task Force (IOTF) criteria, which relies on body mass index (BMI).

While it looks like a drastic increase, Dr. Mark Tremblay, director of Healthy Active Living and Obesity Research at Children's Hospital of Eastern Ontario in Ottawa, claims we have likely underestimated the scale of the childhood obesity problem in the past.

Doctors in this country are seeing more health complications in kids not observed in previous generations. "...to some degree," says Tremblay, "we're mortgaging the health of this younger generation."

The answer? Less screen time, more running around time. As parents, we know this. Question is, are we doing enough? These attempts are clearly not working.